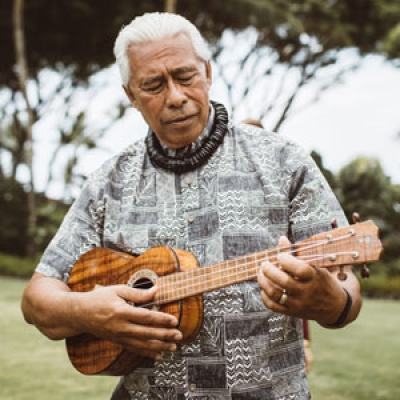 "Music and culture were always a part of our family," says Earl. "I can't remember one day there wasn't music present - whether it was live or played on a record player. But the real music came when the family got together, with other relatives and friends - someone would bring a guitar, an ukulele or two, and after a nice meal, they gathered, played, and sang. There were no boundaries here - anyone who wanted to participate was welcomed. That’s the spirit of participation I try to bring to our Cultural Center, by sharing our arts, traditions and culture with our guests.”

‘Uncle” Earl Kamakaonaona Regidor was born and raised in the quaint village of Pa‘auilo, Hamakua, on Hawaii Island. The youngest in a family of 12 children, his father emigrated from the Philippines to Hawaii in 1919 to work on the sugar plantation. Uncle Earl credits his mother for his love of the culture, including music, language, and most importantly, the values of laulima (cooperation, working together), hanalima (work, working with your hands), lokahi (unity, harmony), aloha (love) and kokua (to help unconditionally).

Growing up on a sugar plantation, Earl spent his summers working the fields with his father, and always enjoyed this connection with the land of his birth island. Upon graduating high school, he enlisted in the United States Navy, and served in Vietnam. His homecoming to Hawaii Island was pivotal in his life, and Earl returned to the plantation as an equipment operator, before enrolling at the University of Hawaii at Hilo and earning his teaching certificate. His calling as an educator had arrived, and he then shared his craft at the Alternative Learning Centers of Kamehameha Schools.

Uncle Earl is a founding team member at Hualalai Resort, having joined in 1996, as one of the mea ho‘okipa - or hospitality ambassadors - at Ka‘upulehu Cultural Center. This he considers one of his greatest achievements as the Center allows him the opportunity to share the history and culture of the Hawaiian people to all who want to learn. He leads the full-time staff at the Cultural Center, where guests may join daily classes in the ukulele, the Hawaiian alphabet and language, traditional crafts, natural history and more. It is also the place where elders share kupuna, the traditional passing of stories from one generation to the next.

Married to his wife Amy since 2004, Uncle Earl is also ordained by Universal Ministries. He now performs weddings and blessings for many Resort guests, adding another fulfilling facet to his colourful life. In his spare time, he enjoys fishing, travel and is an avid golfer.