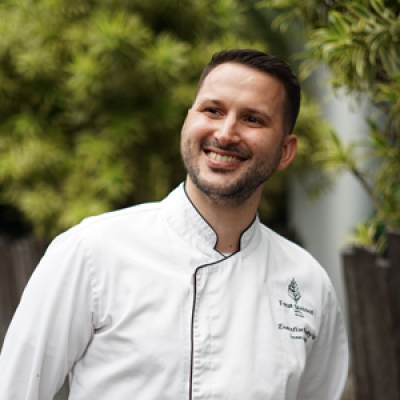 “Nothing should go in front of a guest if we don’t love it ourselves.”

Lorenzo Sollecito is the Executive Pastry Chef at Four Seasons Hotel Jakarta, having most recently led the patisserie and baking at Regent Singapore, A Four Seasons Hotel, where in addition to providing breads and sweet treats for it restaurants, he also created bespoke cakes for the many weddings held at the Hotel.

A native of Mezzocorona in northeast Italy – a region best known for apples – Sollecito credits his late grandmother for inspiring his foray into the pastry world. His first culinary memories revolve around “helping grandmother bake apple strudel and biscuits” as young as five years old.

The first dish he ever cooked at age seven is also his biggest kitchen disaster to date. “My grandmother broke her arm so I had to cook. And I ended up cooking, or over-cooking, one kilogram of pasta without salt. But my grandfather still ate it,” recalls Sollecito fondly.

That did not deter him from pursuing his passion, working his way up from a commis chef to chef de partie in the kitchens of several European hotels and restaurants. But it wasn’t until he met his mentor Executive Pastry Chef Domenico di Clemente at the Michelin-starred Il Palagio at Four Seasons Hotel Firenze that he knew his heart lay firmly with pastry.

“Pastry is a science,” explains Sollecito, who once trashed 100 to 200 soufflés just to perfect one. “It’s technical and precise. And Chef Domenico taught me the art of perfection – that nothing should go in front of a guest if we don’t love it ourselves.”

For Sollecito who counts mille-feuille (“I like the texture of the puff pastry with the Chantilly cream”) and his mother’s apple strudel among his favourite desserts, good pastry starts always with good quality ingredients.

“I believe in keeping things simple and getting the basics right, whether it’s a plain cornetto or torta di mele,” says Sollecito on his pastry philosophy.  “Desserts are a little like the pampering from our spouses or mothers.  We may not get it every day but when we do, it makes us very happy. And I hope my desserts not only fill bellies but also bring happiness – even if it’s just for a few minutes.”