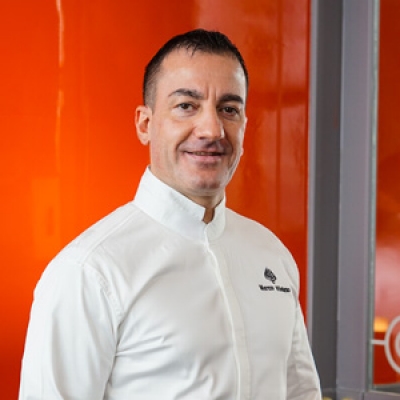 “My mom always cooking from the heart, so I call this “Mama-Style Cooking” and this is what I want to create and my guests to experience. I want them to feel the love in the food.”

Born in Puglia, Italy, his culinary inspirations began at home with his mother. “She is the best cook I know,” he says. “When I was growing up, the house was always filled with the smells of her cooking. I always stayed close to her while she cooked, and over the years, observed her technique.”

Chef Marco also had another great influence, a mentor that taught him that respecting food and its origin is the most important, and to keep it simple, not to overwork the product. This is what Chef Marco aspires to produce now, a blend of ingredients that work together because of their freshness and origin. This is evident in each of his dishes, which have a creative soul and a passionate flair, and yet at their core they are humble, tasty and Italiano. He is adept at creative menu development and is constantly bringing innovative takes on classic dishes, as it were to the table.

“I enjoy working together with the whole team at Four Seasons Hotel Jakarta to elevate the sense of culinary excellence that the Hotel has been able to establish in the city, in such a short time span, since its opening. I am of course most excited about what I bring to Alto Restaurant & Bar and relish the opportunity but also recognise the responsibility of serving the best Italian in town,” adds Chef Marco.