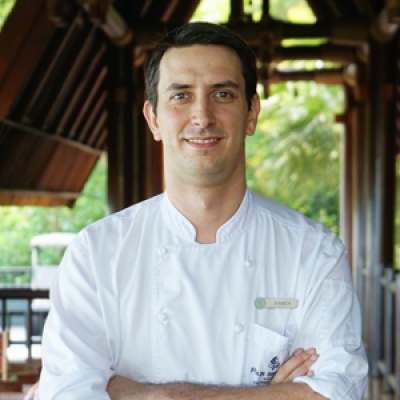 "I am focused on creating good pastries and lasting impressions."

“Sweet dreams and sweet memories,” are what drives Chef Fabien Casalino to follow his passion and create the delicious pastries that he is known for. Beginning at barely 16 years of age, Fabien is the grandson of a pastry chef, and dreamed big of one day owning his own pastry brand.

He followed his passion and earned a degree at the Ferrandi Le’cole Francaise De Gastronomie, making an early entry into the professional kitchen. Honing his craft as an apprentice at the acclaimed French Chocolatier Pierre Herme, he quickly learning the finesse and technique required of a pastry chef.

Fabien then joined the opening team that launched the renowned Café Pouchkine (famous for its Medovic and Pavlova Mont-Blanc) in Paris, 2010, where he stayed on as sous chef until 2013. This already impressive resume received further distinction with a stint at Chocolaterie Jacques Genin, where he worked as pastry chef for a short time.

Venturing out of Paris as sous chef of pastry under the helm of Michelin starred Chef Yannick Alleno, Fabien made a name for himself on the international circuit at the very exclusive Savour Restaurant, in the One and Only The Palm, Jumeira, Dubai. From there, it was only a short hop to Four Seasons, where he has served as Assistant Pastry Chef.

Always one to innovate and improve, Chef Fabien’s vision is inspired by his love for the fantastic, and he believes in creating pastries that will last in people’s memories. “Working in an international organisation such as Four Seasons has allowed me to embrace diversity in the kitchen and I have learned a lot from my colleagues,” he shares. Always calm and collected, he believes that the key to his success is his ability to stay focused and to keep his feet on the ground.

The Four Seasons culture of community and positivity has encouraged him to engage his guests, building on their expectations and experiences, so that his pastries are constantly evolving. At Four Seasons Resort Koh Samui, Fabien creates a repertoire of tropical treats, “inspired by the exotic fresh produce on offer and the cool island life!” He adds, “I am excited to be learning about the Thai culture and sharing this experience with guests through my work.”