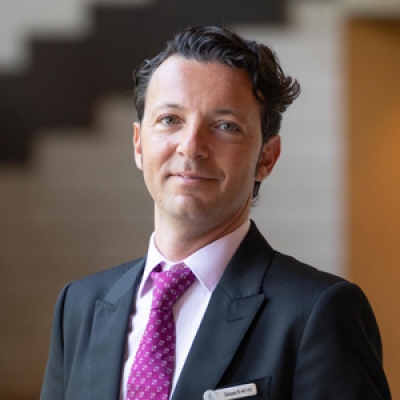 Director of Food & Beverage and Culinary

“At Four Seasons, our expertise lies in crafting locally rooted experiences with an international flair.”

Hailing from the coastal region of Sicily, Giovanni Battista D’Alessandro (better known as Gianni) brings a quintessential Italian vibrancy and warmth to his role as Director of Food & Beverage and Culinary at Four Seasons Hotel Kyoto.

“Hospitality is in my blood,” he says with a smile. “My fondness for hosting comes from my family, my community.” Whether making pasta at home with mamma or going out for pizza every Sunday, young Gianni loved the crackling energy of rooms filled with people cooking, eating, talking and laughing – “sharing all the good things of life together”.

Now in Kyoto, Gianni seeks to recreate a similar buzz and joyfulness around gastronomy, his extensive global experience giving him the perfect credentials to usher in a new era of food and beverage at the Hotel. Under his adept leadership, the team has embarked on an ambitious project to refresh drinking-and-dining offerings across outlets, thus providing brand-new experiences for repeat guests and the local community. With both cuisine and service in play, Gianni’s aim is to deliver lively, sociable experiences without compromising on the elegant, historical feel of the property.

“Think of it as a friendly Mediterranean vibe, anchored in the culture of Japan,” he explains. “At Four Seasons, our expertise lies in crafting locally rooted experiences with an international flair.”

Guests can expect a greater focus on alfresco dining: “We’re making the most of our gorgeous pondside setting, unrivalled in the city.” Also on the cards is a selection of curated culinary events, from private drinking rituals in the intimate five-seater bar at The Lounge and Bar to wine pairing dinners at The Brasserie.

Gianni’s foray into the world of hotels was inspired by his desire to travel and immerse in new cultures. Equipped with a diploma in hospitality from Italy, he began his career at an independent restaurant in Paris, then honed his skills in five-star hotel kitchens in Geneva. In 2008, he moved halfway around the world to Australia for an intensive stint in molecular gastronomy, followed by chef de cuisine roles in Switzerland and India.

Next came a rewarding seven-year chapter in China. Working with the pioneers of luxury hospitality in this market offered strong learning opportunities, with Gianni rapidly working his way up to executive chef and ultimately moving as Director of Food and Beverage to Four Seasons Resort Maldives at Kuda Huraa.

Almost twenty years and eight destinations later, what is the most important lesson he has learned? “To invest enough time in understanding a new culture. Listen and learn, share and adapt, with patience and humility. When you do this, your mind becomes open and paves the way for valuable human connection and cultural exchange. Otherwise you will have the same journey everywhere, just with different décor!”

Along with travel, Gianni’s career has brought together the two other passions of his life – food and people. “Whether I’m working with ingredients or connecting with people, what I enjoy most about my job is its dynamism. Things are always in motion, always changing. That’s who I am, and that’s what I love,” he shares.

Now, living in Kyoto for the first time, Gianni makes it a point to explore his surroundings through the medium of food and drink. On days off, one is likely to find him on a personal culinary expedition, from exploring local ramen shops to tracking down the most legendary Kaiseki (intricately designed traditional multi-course dinners) in town. Kyoto’s atmospheric bars are also on the itinerary. Along with good wine – “part of my Italian heritage” – his go-tos are cocktails and craft gins.