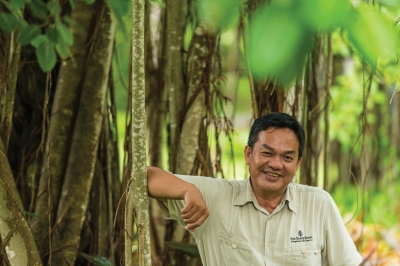 “If one person I educate makes the decision to conserve rather than destroy, it will make my whole life worthwhile.”

As a flying instructor, Aidi Abdullah’s job was all about what was happening in that moment. As a naturalist, it’s all about the future. “When it comes to nature, you are really investing in the future,” says Abdullah, resident naturalist at Four Seasons Resort Langkawi, Malaysia. “You have to learn how to protect and preserve rather than destroy and damage in the hope that our children and grandchildren will inherit a world that is worth living in.”

An avid reader and keen photographer, the young Abdullah had always delighted in exploring the natural world through books and his camera lens. During his flying years, he undertook aerial surveys that took him deep into the jungle and out to sea – experiences that further strengthened his connection with the natural environment. On his days off, he would retreat, camera in hand, into the surrounding countryside. So when a former student told him of a vacancy to be a nature guide in Langkawi, he jumped at the chance. “I haven’t looked back since,” he says.

At Four Seasons Resort Langkawi, Abdullah takes guests on garden walks and mangrove tours, helps the hotel reduce its carbon footprint and answers guests’ questions on what measures they can take to help. “The best bit is the people I meet,” he says. “Most have a genuine interest in nature and the future of the planet. It motivates me a lot.”

Abdullah has also been instrumental in setting the Resort’s Kids For All Seasons programme, where younger guests are taken on boat tours, to look at plants, or to learn about monkeys. “Children are the future,” he says. “If we can’t get into them that they have to look after the planet, then they will destroy what we have started. It’s about teaching them the simpler things in life. Life is not a video game.”

Back home, Abdullah has three children of his own – a son and two daughters – and likes nothing more than a relaxing family day on the beach. He also likes to play country and rock and roll music from the ’60s, ’70s and ’80s, though not as loud as he might like. “Playing Willie Nelson or Elvis Presley at 200 decibels at 3:00 am isn’t appreciated!” he says. The same cannot be said of his work as a naturalist.