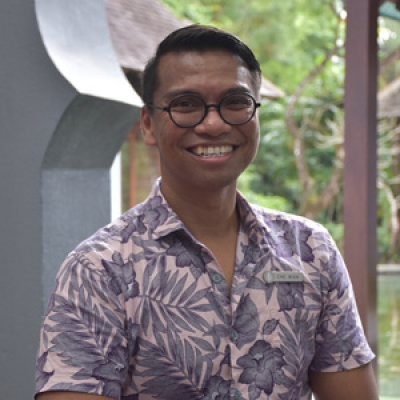 “The more you look after yourself, the more you embrace gratitude for yourself and others.”

Che Wan Ali’s appointment as Spa Manager at Four Seasons Resort Langkawi marks an inspiring return. As a member of the original pre-opening team in 2004, Che was here for the whirlwind beginning of the Resort’s journey – which also happened to be the start of his own Four Seasons story. He now comes back to the property with a wealth of experience to share, having earned his stripes halfway across the world.

Born and raised in Malaysia, Che always dreamed of seeing the world. “It was my love for travel that led me to a career in hospitality, instead of becoming an accountant like my parents wanted,” he smiles. After cutting his teeth on the pre-opening of Shangri-La Putra Jaya, he joined the launch team for Four Seasons Resort Langkawi. His then-colleagues remember Che’s ability to light up any room with his warm, vibrant personality, a quality that continues to make him a favourite among co-workers and guests alike.

With his infectious enthusiasm and willingness to take on new challenges, Che continued to gain experience and climb the ranks, becoming Assistant Food and Beverage Manager at Langkawi before transferring to Four Seasons Resort Seychelles, where he expanded and honed his leadership capabilities. In 2013, Che was promoted to Assistant Spa Manager, a role he quickly excelled at thanks to his passion for guest service and spa treatments. His strong performance paved the way for a transfer to Four Seasons Resort Oahu in Hawaii, where he managed one of the company’s largest, most successful spas.

Now, a decade after it all began, Che is delighted to be back at Four Seasons Resort Langkawi which, as he remarks, “feels like home.” Leading the exceptional team at the Geo Spa gives him the opportunity to take an already-superb spa facility to new heights and further develop local talent. Che views the Spa not just as a space for indulgence but also self-transformation. “I believe spa treatments are a must for everyone, at any age. The more you look after yourself, the more you embrace gratitude for yourself and others.”

As a dedicated globe-trotter, Che has worked through nearly his entire bucket list, with Italy taking the honours for favourite destination, followed by Japan. Both destinations score high on food, which is Che’s second love, after travel. “I love all kinds of food, especially seafood. On my days off, you can usually find me exploring new restaurants in town,” he says.