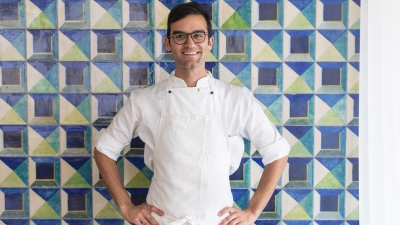 “We really value the one-on-one moments we get with guests. People like having a connection with the kitchen, and it’s always good to remind us who we’re working for.”

In any restaurant, there are back-of-the-house personnel who prefer to do their jobs right where they are. Then there’s Diogo Lopes, Pastry Sous Chef of Four Seasons Hotel Ritz Lisbon. “I’m not shy,” he explains of his fondness for daily moments when he leaves the kitchen behind for the elegant dining spaces of Varanda Restaurant, to chat to guests about the delicate creations on their plates.

“We really value the one-on-one moments we get with guests. People like having a connection with the kitchen, and it’s always good to remind us who we’re working for.”

Lopes has plenty to chat about. Every month on Saturday, for instance, he joins other members of the pastry team leading a Masterclass for brunch clients, teaching some of the Hotel’s favourite desserts such as the raspberry mille-feuille – “one of the trademarks of the Hotel” – or Easter eggs that look like chicks, with hands-on technique and recipes to go that people can actually replicate at home. “The feedback we’ve had from the program is amazing.”

Amid the booming dining scene in Lisbon, the Hotel has made real effort to put “more wow” into the menu, he says. He mentions, in particular, sudachi, a dessert he created flavoured with Japanese citrus that – molded, sculpted, painted, ornamented and arrayed with pennyroyal granita upon the plate – could easily be mistaken for a fresh-picked lime.

Whatever sudachi is, it’s not what one might expect from a French restaurant, says Lopes – and that’s the point. “The Ritz has a classical French aura, but we’re welcoming new trends and giving more attention to the dining experience. It gives us an opportunity to be more playful and explore what we can do. I came to the Hotel at the right time.”

Lopes traces his interest in the pastry arts to his childhood in Portugal. A “chubby kid” with a big appetite, he watched his mother and grandmother in the kitchen and began making simple dishes of his own. “I thought, ‘I like to eat so much, maybe I should cook.’ A lot of kids would say things like that, but I meant it.”

After high school he studied management at hotel school, but it wasn’t the angle he was after. So he began learning pastry techniques and realised how much he enjoyed it. “You can do so much with texture and colour and design. I went for it and I didn’t look back. Most people who get into pastry don’t look back.”

Four Seasons Hotel Ritz Lisbon was the first place Lopes interned. “My first day here was my birthday!” He recalls being impressed with the size of the operation and the respect the company had for its talent. “We’ve always had the best projects and the best products to work with. They really want to see people grow.”

Lopes also recalls an influential internship at The Fat Duck, Heston Blumenthal’s Michelin-starred homage to culinary precision and invention in Bray, England. The most interesting thing there was not the recipes, but the process that went into developing them, he says. “The idea is always to give people and experience they’ve never had before. It was fascinating – I just soaked it up.”

Now loving life in Portugal, Lopes is trim, fit, gregarious and active, a regular biking and running in the city and always happy to be surrounded by people or at the beach. “I really enjoy going out to restaurants here in the city. There’s a great night life in Lisbon.” Does he still have a sweet tooth? “Oh, yes.”