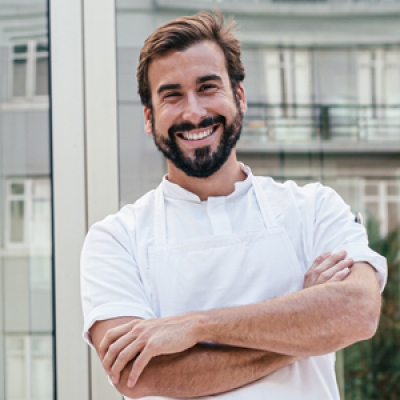 "We carefully consider everything to keep the spotlight on the food. That’s our inspiration: The highlight of everything we do.”

“I love the name,” says Pedro Pena Bastos, waxing on Cura, the signature restaurant he oversees as Chef de Cuisine at Four Seasons Hotel Ritz Lisbon. “It’s related to ‘curator,’ as in respect of knowledge and that we are making the dining experience really special,” he continues. “I can definitely relate it to my cuisine.”

Warm and inviting, Pena Bastos’s celebration of seasonal Portuguese ingredients is located along the Hotel’s façade with its own very visible entrance on Rua Rodrigo da Fonseca and seating for 28 diners inside.

Back in the kitchen, the Chef is intent upon bringing “more joy and soul” to CURA’s offerings than are typical of fine-dining fare. He works with small local suppliers to source ingredients of superb flavour and condition, and he plucks others such as crunchy reindeer moss, marbled meat from Alentejo Iberian pigs, and “the best chickpeas we can find” directly from the wild. His menu highlights a dozen or so dishes at a time, changing with the seasons, and he tries to work with just two or three ingredients “and one really sharp knife” at a time, the better to ensure that guests taste the food as it is meant to taste. “There are no tricks up our sleeves here.”

There aren’t many tweezers in the kitchen, either – at least not at the ready. Pena Bastos plates to reveal “a different soul, a different shape” to the food, eschewing pinpoint precision and symmetry for “the look of something you actually want to eat.” Meanwhile, custom ceramics, cutlery, and glassware add to the presentation, each carefully designed and laid out on marble tabletops accented with silver and gold glitter to be “in tune” with the food.

Result? The perfect background for simple yet flavourful combinations such as squid with hazelnuts, roasted seaweed butter and caviar, Hokkaido pumpkin, chanterelles, pistachios and Indian cress; or a super-fresh-caught croaker from the fish market in Peniche garnished with cabbage sprouts and marjoram. “The ingredients are our inspiration,” he concludes. “They’re the highlight of everything we do.”

Pena Bastos has done quite a bit with food over his comparatively brief culinary career. All of 29 when he was appointed to lead CURA in 2019, he grew up in the countryside in northwest Portugal where ingredients weren’t just perused at the grocery store, but were something alive, transformative, and very meaningful. He recalls watching onions grow in the field from a half-inch to 10 inches over a couple of months, and how butter left out on the counter for days by his grandmother took on a cheesy, aged flavour, which he now brings to the table at CURA in tribute to his memories.

“Those things fascinated me. I wanted to see where I could take them.”

It took Pena Bastos a while to figure out how to do it, however. In his final years of secondary school, he leaned toward following his older brother into microbiology or becoming an engineer. He also had a thing for rock ‘n’ roll, drumming in a band called People Driving Planes with mates who, like him, “were a little out of place in the classroom.”

As much as he loved playing music – “I still do!” – cooking was a more straightforward way for him to give people happiness. “You’re spreading love and emotion in the kitchen. People don’t need to come to restaurants for food: They can just order something and have it delivered. But they come for the experience. I was all over that.”

After starting at a small vintage bistro near his hometown, Pena Bastos studied hotel management and culinary, and went onto work at a string of Michelin-starred restaurants in Lisbon, London, and Copenhagen. He then started his own project providing exclusive catering services for custom food events as far away as Asia, and followed by heading his first kitchen at Grémio Literario, a private club in downtown Lisbon.

Things really got cooking for Pena Bastos in 2014 with an invitation to reopen the restaurant Esporão in Alentejo, Portugal, where he created a concept focused on local products from small producers and a private garden. Esporão proved a hit, earning awards in 2017 and Bastos the title “New Revelation Chef” by a prominent restaurant blog.

Finally, after being named Chef de L’Avenir by the International Food Academy in 2018, Pena Bastos opened CEIA, with just 14 seats in the heart of old Lisbon where he showcased new Portuguese cuisine inspired by the Portuguese cuisine of old. CEIA was a bold move and proved a critical hit, noted on the 2019 World’s 50 Best Restaurants list as a “new discovery,” and earning Pena Bastos the attention of Four Seasons Hotel Ritz Lisbon, which approached him to create the new dining concept of CURA.

Pena Bastos is philosophical about his successes en route to the icon of hospitality in Lisbon. “Twenty years ago, you didn’t need any qualifications to become a cook. Now it’s just the opposite: You have to downgrade yourself and be super-humble to learn from the best.” His career has been a huge learning process, and it still is, he says. “The way you connect with guests and the food here is different from places I’ve worked in the past. The Hotel shapes the way we operate CURA, and I believe CURA helps shape the Hotel.”