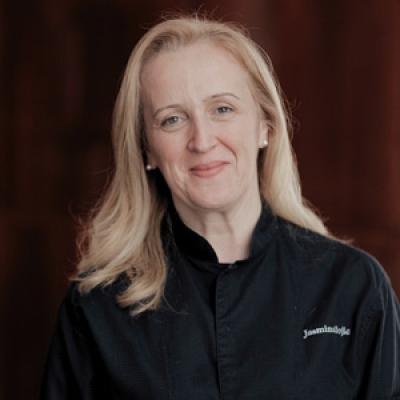 “Sometimes when you’re busy in the pastry kitchen, you don’t have time to think. Then something creative pops in your head and you’re, like, ‘Wow!’”

“I have always been into New York – this is the place for me,” says Jasmina Bojic, sweetly, of the city she has called home since arriving as a 17 year old in the early 1990s. Funny, then, that the Executive Pastry Chef of Four Seasons Hotel New York is less than jazzed about one of the city’s famed desserts. “New York cheesecake is too dense and creamy for my taste,” she says, noting that she prefers to fashion her cheesecake into something “very, very light and airy – almost like a mousse.” It’s one of Bojic’s signatures: “I just can’t take it off the menu.”

Nor can she take off Hazelnut Napoleon, an “amazing dessert” layered with myriad textures – “creamy, crunchy, sweet and salty” – to dazzle every part of the palate. Desserts do come and go under her watch, however, the better to keep guests hungry for more. Upon arriving at Four Seasons East 57th Street address at the start of summer 2013, Bojic got to know the pastry team and then began enhancing the in-room dining menu and adding new desserts at Ty Bar and The Garden.

Whatever the venue, Bojic and her team are consistently busy. “I started here during what was supposed to be a slow month, but things are never slow here.” She recounts numerous days when her staff is “slammed” keeping up with demand as banqueting numbers jump from one minute to the next. “We’ll almost be done with a request for strawberry shortcake for 40 people and then we’ll get a phone call telling us the party has grown to 75,” she says. “That happens a lot.”

Fortunately, Bojic has plenty experience fashioning sweets for mercurial New York clientele. She grew up passionate about cooking in her native Yugoslavia, where her grandparents owned a restaurant and her mother was an accomplished baker. After hopping the Atlantic to live with her other grandparents, she graduated with a degree in pastry arts from the New York Restaurant School and promptly landed a plum internship with the Glazier Group at a restaurant at South Street Seaport.

A full-time position and seven years later, Bojic moved uptown to Tavern on the Green, which served hundreds of thousands of diners a year and saw her team turning out up to 800 desserts each day. “It had a reputation of being a factory, but that’s why I wanted to do it,” she recalls of her tenure at the Central Park landmark. “I love the action, the business, the craziness of what I do.”

Bojic also loves the way her profession continuously transforms and reinvents itself. Tastes and techniques change constantly, she says: “Ten years ago it was soooo hard to create a showpiece with chocolate and sugar. It’s still a challenge. But there are so many tools available now, the process is easier, cleaner and crisper.” She keeps up on the latest advancements by perusing trade journals, dining out incessantly, and taking periodic trips to attend pastry seminars at the famed Lenôtre school in Paris.

Tastes change, too, with consumer trends running two or three years on average as far as Bojic can tell. “One year it’s macaroons, then it’s doughnuts, and then it’s cupcakes. Whatever it is, suddenly everyone has to have it.” Shying away from sugar because of diabetes? Trying to stay vegan, dairy- or gluten-free? “We can create desserts that are right for anybody.”

Whatever the era, taste or dietary concern, there is one thing Bojic knows won’t change: “Dessert will never lose its cache.”