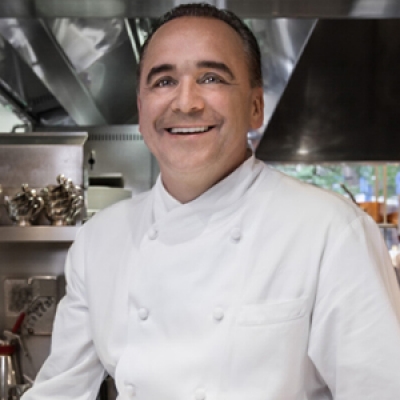 Though Jean-Georges Vongerichten is one of the world’s most famous chefs, his skills extend far beyond the kitchen. A savvy businessman and restaurateur, Jean-Georges is responsible for the operation and success of 39 restaurants worldwide.

Born and raised on the outskirts of Strasbourg in Alsace, France, Jean-Georges' earliest family memories are of food. He began his training in a work-study program at Auberge de l'Ill as an apprentice to Chef Paul Haeberlin, then went on to work under Paul Bocuse and Master Chef Louis Outhier at L'Oasis in southern France. With this impressive three-star Michelin background, Jean-Georges travelled to Asia and continued his training at the Oriental Hotel in Bangkok, the Meridien Hotel in Singapore and the Mandarin Hotel in Hong Kong.

It was during this time spent working and travelling throughout Asia that Jean-Georges developed his love for the exotic and aromatic flavours of the East. His signature cuisine abandons the traditional use of meat stocks and creams and instead features the intense flavours and textures from vegetable juices, fruit essences, light broths and herbal vinaigrettes. Jean-Georges’ culinary vision has redefined industry standards and revolutionised the way we eat.

Jean-Georges is involved in every aspect of his restaurants – concept, menu, architectural design, staff selection and trainings – in an ongoing effort to create restaurants that are both timely and enduring. Inspired by his travels, Jean-Georges is constantly developing fresh concepts and evolving as a chef and restaurateur, both adapting to and impacting the global culinary landscape.

Jean-Georges has made culinary history and developed a reputation as remarkable as his food by tapping his deep understanding of the restaurant world and pairing it with his forward-thinking vision. Yet, after years of success, Jean-Georges’ favourite retreat is still the kitchen, and his favourite meals dished from a street cart in Thailand.

Jean-Georges has published several cookbooks reflecting his influential style of cooking, including Simple Cuisine (Wiley, 1990); Cooking at Home with a Four Star Chef (Broadway Books, 1998), for which he won the Best Cookbook Award from the James Beard Foundation in 1999; and Simple to Spectacular (Broadway Books, 2000). In October 2007, he released Asian Flavors of Jean-Georges, featuring beloved recipes from his restaurants Spice Market, Vong and 66. Most recently, Jean-Georges released Home Cooking with Jean-Georges: My Favorite Simple Recipes (Clarkson Potter 2011).

JGV: A LIFE IN 12 RECIPES by Jean-Georges Vongerichten with Michael Ruhlman (Norton, 2019) is a look into Jean-Georges’ life, anchored by twelve recipes that have defined his career. Enlivened with his hand-drawn sketches and intimate photographs, JGV is a book for young chefs, as well as anyone who has ever stood at a stove and wondered what might be.

Jean-Georges has appeared on Live! With Regis and Kelly, the Today Show, Good Morning America, The Martha Stewart Show, The Early Show on CBS, Top Chef, the Food Network, in the 1995 PBS series In Julia's Kitchen with Master Chefs and Sundance Channel’s Iconoclasts with Hugh Jackman. Additions since then include NBC’s Late Night with Jimmy Fallon, Fox 5 “Good Day Café” and Late Night with Seth Meyers. He also co-hosted his wife Marja’s PBS series, Kimchi Chronicles.