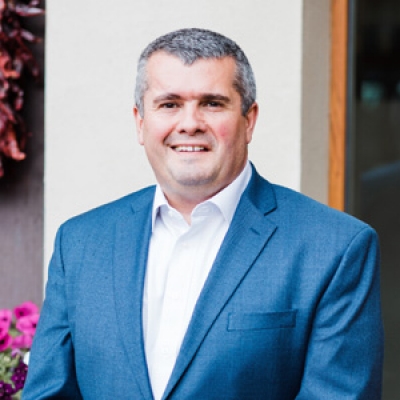 “Watching the sunset from our terrace over dinner or a drink is worth the trip here alone.”

“I look at my time in the kitchen as giving me a big advantage,” says Bixente Pery, reflecting on the unusual career path he took from the back-of-the-house to the top of the ladder as General Manager of Four Seasons Resort Rancho Encantado Santa Fe. Trained in the culinary arts in his home country, Bixente cooked first in his native Basque region before joining the French Navy for mandatory military service, then for hotels across South America, Central America and the United States before changing his focus to be directly involved with guests.

“You grow in the back-of-the-house and get firsthand experience in what the staff goes through everyday,” he says. “More than anything, you learn how to please guests.”

Pleasing is Bixente’s focus in Santa Fe. Appointed to lead Rancho Encantado in summer 2018, he set out to raise awareness of the peaceful isolation and experiential opportunities that await guests and locals alike. “I want travellers and the community to develop a deep emotional connection with this property and come escape to a magical destination,” he says, noting outdoor experiences available year round, courtesy of the Resort’s onsite adventures team. “This is a unique place of privacy, tranquility and luxury where they can disconnect to reconnect and make memories for life.”

Located in the foothills of the Sangre de Cristo mountains, just minutes from the gallery-filled downtown of Santa Fe, the Resort unfolds as a romantic remove with adobe-style casitas with fireplaces and private patios; a large Spa incorporating water features including a sunlight-dappled outdoor swimming pool; and function space with panoramic views of the natural beauty of the southwest from indoors and out.

The Resort’s signature dining experience Terra dishes flavours of northern New Mexico in a sophisticated setting while The Bar crafts signature cocktails from locally foraged ingredients. “Watching the sunset from our terrace over dinner or a drink is worth the trip here alone,” he says.

Bixente arrived in Santa Fe from Four Seasons Hotel Houston where as Hotel Manager he oversaw daily operations for vastly more accommodations. It was rewarding, but he prefers the pace and promise of a Resort. “It’s business versus pleasure,” he says. “What we have here is a place for families and couples to share special moments they’ll remember for life. I want every guest to have experiences like that.”

Of course, it takes talent to bring such goals to fruition. “It’s about balancing my role as a strategic thinker and an operator, mixing with guests while leading the team.”

Born outside of Bordeaux but raised near the Spanish border in the Basque region of France, Bixente grew up cooking alongside his grandmother. Inspired by the experiences he shared in the kitchen, he pursued culinary training as a teenager and spent time cooking on an aircraft carrier for the French Navy. “We landed at 17 ports in Asia and another 17 in South America.”

He was only 18 when he returned to France, but he knew where his future lay. “After seeing so much of the world, I wanted to see more.”

Drawn back to South America, he found work as a chef in Medellin, Colombia for a major international hotel group. Six years and four promotions later, he was on the opening team of a hotel in Managua, Nicaragua as executive chef and then the same for two more hotels in the US.

Finally, in 2006, he switched to the front-of-the-house and the following year joined Four Seasons as Director of Food & Beverage in Guanacaste, Costa Rica. Appointed Hotel Manager in Houston in 2015, he was involved with a major renovation that included, among several other enhancements, a new food and beverage outlet, Bayou & Bottle. “You have to be pretty creative to keep guests coming into your hotel and outlets while they’re being renovated,” he remembers with a smile.

While there are no major transformations on Bixente’s plate in Santa Fe, he is always looking for ways to enhance the Resort experience and get word out about unique offerings for guests. He particularly admires the EQUUS Experience, an immersive equine program created through a partnership that invites guests and group clientele to discover things about themselves while caring for 1,000-pound animals with attitude to match. “It’s looking at team-building in a whole new way.”

Now wrapped in the striking beauty and charm of New Mexico, Bixente prefers to spend his downtime pursuing simple pleasures with his family: cooking, following soccer and rugby, and occasionally playing golf. He hopes to return to South America one day. “I like lifestyle there: laid back and relaxed.” But for now? “I always wanted to be someplace that had roots in Spain, so I’m happy I ended up in Santa Fe.”