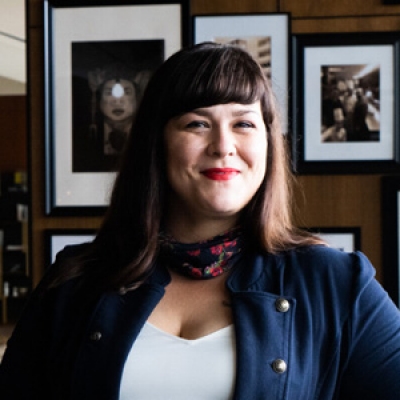 As one inclined to synthesize, collaborate and create, India Stevens is right where she wants to be as Bar Supervisor of Cinder Bar at Four Seasons Hotel St. Louis. “We have so many high-quality products at our fingertips: a kitchen full of fresh fruits and vegetables, and an array of spirits from around the world,” she says. “I like to play with ingredients to see where they take me – from trying unlikely spirit combinations to playing with the acidity levels of fresh citrus, and I encourage everybody on our team to do the same.”

India is the spark behind the well-crafted seasonal cocktail menus that greet guests of Cinder Bar. Playing off the dishes of Cinder House, the Hotel’s signature South American-inspired dining experience fashioned by James Beard Award-winning Chef Gerard Craft, she draws inspiration from drinks-of-the-moment in Brazil and beyond. What India calls her “forward-thinking culinary approach” to mixology has resulted in originals such as the Maracuya, a variation on the Hemingway Daiquiri with passion fruit, lemon and grapefruit in the mix; and the Maestro, similar to a classic Old Fashioned but with Venezuelan rum. Those and other drinks appear alongside regional classics such as the Pisco Sour of Peru, the Caipirinha of Brazil, and a frothy Lemon Batida with Novo Fogo Cachaça, Velvet Falernum and coconut milk.

“I like to focus on the importance of product knowledge and theory, and I hope our team learns from me just as I did from my mentors.” Creativity is a commodity in the bar business, she says, though not every guest is necessarily thirsty for the same. “We often receive a lot of requests for vodka sodas and Old Fashioneds…until guests take a look around the bar and start to notice all the unique-looking cocktails. Perceived drink preferences suddenly shift!”

India grew up in St. Louis where she was influenced by her father’s creativity at a young age. With a passion for music and love of food, it wasn’t uncommon for her to walk into the kitchen and see her father recreating recipes from around the world as he hummed along to music, which played in the background. “He liked Zydeco music and would often play blues and reggae as he cooked everything from Cajun jambalaya to Indian curries - he could be very adventurous. I was the only one of my friends eating Borscht back then.” This passion to try new things and work with fresh ingredients sparked an interest in India.

She started behind the bar in the early 2000s, initially making Cosmos for ladies and gentlemen while they lunched at Neiman Marcus in St. Louis. “I was introduced to an entirely new world, shopping with a martini glass in hand – how fun,” she remembers with a laugh. She moved on to the Ameristar Casino in St. Charles during its busiest years, and then landed at a hotel in the city’s downtown that was regularly filled with convention clientele.

While she made many friends and furthered her professional experience along the way, India began longing for a place with a more amenable pace where she could grow her talent and hone her craft. She found a new opportunity at Barcelona Tapas Restaurant in nearby Clayton, Missouri. “This is where I started learning to create menus and helping to educate teams that I was working alongside.”

Now a steady presence at Cinder Bar, India says she can’t get over the beauty of the Hotel and the abundance of resources she has to work with - to quench the thirsts and dazzle the palates of Four Seasons guests in her hometown is a dream come true.