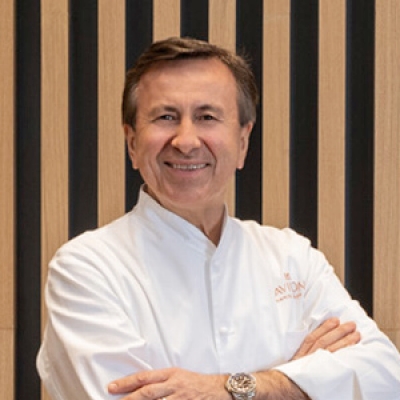 Daniel Boulud is chef-owner of several award-winning restaurants and the Feast & Fêtes catering company. While he hails from Lyon, France, it is in New York that he has truly mastered the dining scene and is today considered one of the world’s leading culinary authorities. Raised on his family’s farm in the village of Saint-Pierre-de-Chandieu, the chef remains inspired by the rhythm of the seasons and menus driven by fine ingredients. Since arriving in the US in 1982, Boulud has become renowned for the contemporary appeal he adds to soulful cooking rooted in French tradition.

Daniel Boulud’s New York City restaurants include his flagship DANIEL (1993), a Michelin starred Relais & Châteaux member; the elegant one Michelin star Café Boulud (1998) with its adjacent cocktail bar, Bar Pleiades; his contemporary Parisian bistro, db bistro moderne (2001); and two Upper West Side restaurant including the charcuterie-centric Bar Boulud (2008) and the Mediterranean themed Boulud Sud (2011). DBGB Kitchen and Bar (2009), situated downtown on the corner of Bowery and Houston, is chef’s relaxed restaurant where the French brasserie meets the American tavern. Épicerie Boulud (2011), with locations across from Lincoln Center and within The Plaza Food Halls, is an eat-in and take-out market and café, with exquisite homemade and gourmet items from around the world.

Beyond Manhattan the chef has created Café Boulud in Palm Beach (2003) and db bistro moderne in downtown Miami, Florida (2010). Boulud has extended his culinary reach internationally with db bistro moderne at Singapore’s Marina Bay Sands (2010), Bar Boulud London (2010) at the Mandarin Oriental Hyde Park; Café Boulud and d|bar at Four Seasons Hotel Toronto (2012), and Maison Boulud at the Ritz-Carlton Montréal (2012). In spring 2014 the chef returned to Las Vegas and opened db Brasserie in partnership with The Venetian Las Vegas. Additionally, in September 2014 he opened a second DBGB at downtown Washington DC’s CityCenterDC, and Bar Boulud at Boston’s Mandarin Oriental.

Boulud’s culinary accolades include James Beard Foundation awards for “Outstanding Restaurant,” “Outstanding Restaurateur,” “Best Chef, New York City” and “Outstanding Chef of the Year.” He has been named “Chef of the Year” by the Culinary Institute of America and Chevalier de la Légion d’Honneur by the French government. Restaurant DANIEL has been cited as “one of the ten best restaurants in the world” by the International Herald Tribune, has earned multiple Michelin stars and Wine Spectator’s “Grand Award.” In 2015 the World’s 50 Best Restaurants awarded Boulud its Lifetime Achievement Award for his success as a restaurateur, businessman, and "chef who is revered as one of the world’s finest." Boulud’s culinary style is reflected in nine cookbooks, including the definitive DANIEL: My French Cuisine (Grand Central Publishing, 2013) and his most recent My Best: Daniel Boulud (Ducasse Books, 2014).