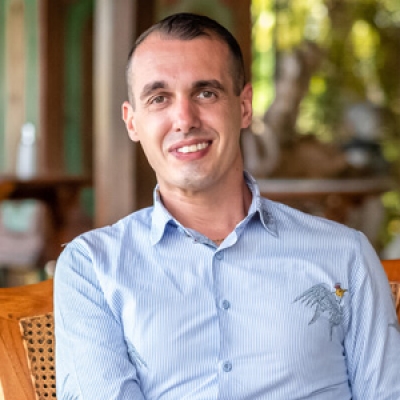 “The ultimate goal is to facilitate surprising, memorable and personalised experiences for our guests on a daily basis. If guests reflect upon their stay in Bali as a perfect getaway, then we have all done our jobs."

Creative. Passionate. Amazing energy. Natural friendliness. These are the descriptive words to use when speaking about Nicolas Senes, the Food and Beverage Director at Four Seasons Resort Bali at Jimbaran Bay. Prior to Bali, he spent five years in China with Four Seasons Hotel Guangzhou and Shanghai Pudong as the Director of Food and Beverage.

With 14 years' experience in food and beverage innovation for luxury hotels in Europe and Asia, Nicolas sees his assignment at Four Seasons Resort Bali at Jimbaran Bay as a great opportunity to expand his experience in a resort setting, to complement his time at urban hotels. “It is an honour to be the Food and Beverage Director of such an iconic Four Seasons property, combining authentic Balinese traditions with culinary innovation. It's the ultimate combination.”

As Director of Food and Beverage, Nicolas is in charge of the Resort's entire dining experience, comprising Sundara, Taman Wantilan, Jala and Pool Terrace Cafe, as well as Villa Service and exclusive experiences such as the Gazebo Dinners and Sunrise Breakfast.