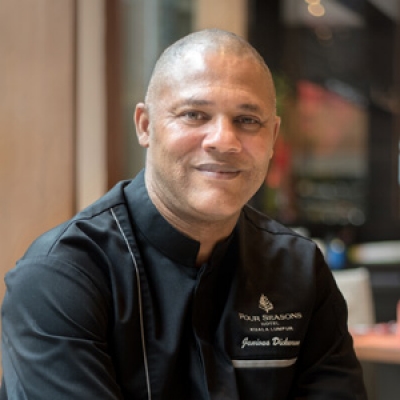 “My kitchen philosophy is ‘extraordinary, beyond expectations’: food is life, food that catches the eye, touches the soul and transfers my true passion into taste.”

Chef Junious Dickerson’s dishes have featured in glossy magazines and cookbooks; he’s appeared on TV and radio in the US; served royalty and heads of state; chaired food festivals and judged cooking contests; and it all began with a part-time job washing dishes at a members-only country club to pay his parents the monthly installments on his first car.

The club’s chef would pull him into the kitchen during busy times and, recognising Chef Junious’ talent, promoted and encouraged him. Straight out of high school, Chef Junious pursued a formal apprenticeship through the American Culinary Federation (ACF): the US’s cooking authority. And so began a lifelong love affair with the camaraderie, cacophony and creativity of the kitchen.

“Cooking quickly became my way to express myself, be creative and show love,” he recalls. “Through food, I can extend my personal take on hospitality, just as if I was welcoming someone into my own home.  It’s engaging and fulfilling to serve others, working from your heart and creating memories with your hands.”

Hard-working and determined, Chef Junious attributes much of his ever-evolving cooking style to his life experiences, both the hardships and highs. Inspired by everything he has ever seen, read, watched, loved or lost, his one constant through nearly three decades of culinary experience has been “personal cooking, from a heart that tells a story through food.” He loves to challenge guests with cuisine that is different from what they ever thought they would like and encourages a "food is life" exploration that is as exquisite as it is eye-opening.

“My true passion in life encompasses all-things-culinary – from cultivating sustainable practices, working with local farmers to source the freshest and most exotic ingredients, to creating unrivalled culinary experiences for my guests,” he notes, adding, “I look forward to bringing people together and creating an unforgettable sense of place through the Hotel’s distinct culinary offerings.”