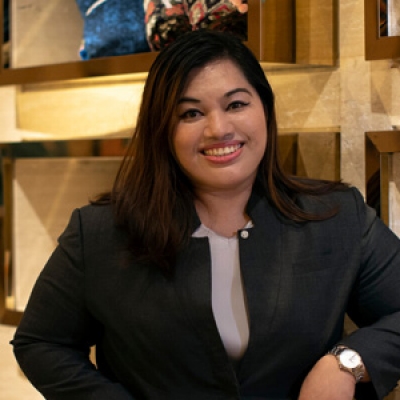 "A spa day is not just a luxurious experience but a gift for your body."

With more than 10 years in spa operations and management, Rosa brings a wealth of experience and creativity to the table, with a vision to establish the Spa at Four Seasons Hotel Kuala Lumpur as a premier wellness destination.

Before joining Four Seasons, Rosa worked on the island of Langkawi for a few years, serving as spa manager at The Danna Langkawi and operations manager at Bon Ton & Temple Tree Resort. Prior to that, she spent over a decade honing her spa credentials with Mandara Spas. Starting out as spa manager at Club Med Cherating Beach, Malaysia, Rosa rose steadily through the ranks: in 2009, she became operations manager of 10 spa outlets in Malaysia, followed by a portfolio of 6 spas across the Maldives from 2015 to 2017.

“For me, true wellbeing means bringing together the best of both worlds – from time-tested healing traditions and native ingredients, to the most cutting-edge techniques and products out there,” explains Rosa. “Our Spa team blends various influences together to craft bespoke, deeply rejuvenating wellness and beauty rituals.”

Perhaps Rosa’s talent for combining diverse, beautiful elements into a unified whole can be traced back to her childhood years in Kuching, Sarawak – a vibrant, multicultural town with more than 26 ethnic groups, where most people speak at least 3-4 languages. “Each year, my hometown would host the World Rainforest Music Festival, and that’s where I first discovered my passion for meeting new people and exploring new things,” recalls Rosa.

A keen scuba-diver and cat lover, this proud Sarawakian now enjoys adventures in Kuala Lumpur – from diving with sharks at Aquaria KLCC, to making furry friends at the city’s quaint cat cafes.