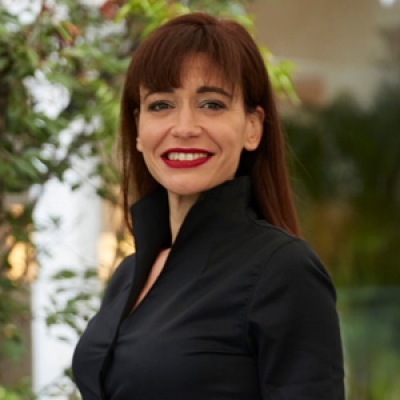 “There a large number of employees – around 40 per cent – who have been here for 10 or even 15 years. Just think of all the lives they have touched!”

“I’m a grasshopper – I like to move around. So to end up in an iconic place like this as a first-time GM is extraordinary,” says Andrea Obertello, musing on the professional significance and personal thrill of her 2019 appointment as General Manager of Four Seasons Hotel Milano. As the newest member of the team at the company’s second-oldest address on the Continent, Obertello quickly grasped a key element of the property’s success. “There a large number of employees – around 40 per cent – who have been here for more than 10. Just think of all the lives they have touched!”

Those include clientele from far away as well as right nearby. Growing the hotel’s perception among locals is a priority for Obertello. “Things come and go very quickly in Milan, so we don’t compete on trends,” she explains. “But on the flip side, we can make the impression that Four Seasons is where you’ll get the best service and the best experience in town. We want to gain the loyalty of locals in that way, and then introduce new initiatives to keep them coming back.”

To that end, Obertello emphasizes creativity and positivity from the team. She wants everybody to feel free to contribute, whatever the eventual outcome of their ideas. “That makes people believe there is a higher purpose to what we do.” She avoids giving answers, she says, preferring that people think differently, figure things out on their own, and move them forward. “The minute we start accepting the status quo, it’s a problem. Just because something has always been done a certain way doesn’t necessarily mean we should keep doing it.”

Argentinian by birth, Obertello was drawn to the hotel industry not so much by a desire to travel, but by the diverse array of skills and duties it involves. Hailing from a middle class family, she grew up in Buenos Aires and found her way to a Swiss hotel school where she was first offered an opportunity to join the hotel group of her dreams. “A team of three Four Seasons managers came to the school on an recruitment trip. It was stressful, but they made me feel so comfortable. I can still remember all of their names.”

The trio interviewed half of the student body, but in the end offered positions to only three people, including Obertello. “They told me, ‘we know you feel like you don’t know anything, but we’re impressed with your potential and we’re going to give you the opportunity to learn.’ I was like, ‘wow, I like you – take me with you!”

If only it had been that easy. Obertello initially turned down the offer and headed instead to Jamaica to earn money and experience at another hotel. But she never forgot about Four Seasons. A couple years later, she applied and landed as a receptionist at the company’s former address in Carmelo, Uruguay.

She grew into other positions and found her way to other properties around the world including Miami, Florence and Marrakech, before landing as Hotel Manager at Four Seasons Hotel Doha in 2017. Along with managing the team, much of Obertello’s time and energy in Doha was focused on preparing the property for a major renovation, which got underway just weeks after she left for Milan. “It brought me a whole new set of skills.”

Meantime, Obertello’s arrival in Milan followed close on the heels of a re-conception of the hotel’s sunny signature dining experience La Veranda, and just ahead of various upgrades and improvements to the property. “I timed it just right, didn’t I?” she asks with a laugh. “It’s an exciting time to be here.”