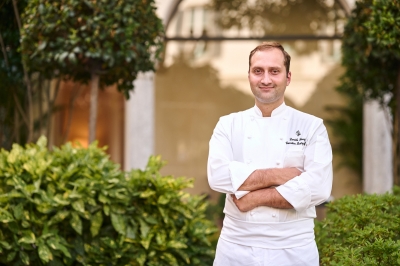 “My work is made of creativity, attention to detail and, above all, teamwork.”

Daniele Bonzi is the talented young Executive Pastry Chef of Four Seasons Hotel Milano, and with his unique patience and warm personality he is also one of little guests’ most favourite staff members. Among Daniele’s daily work in creating exquisite pastries for the restaurant Zelo, he’s also the talent behind the Hotel’s famous Chocolate Room, one of the Hotel’s secret places dedicated to chocolate lovers. Each year Hotel guests and locals alike expect avidly the new theme of this extraordinary room whose walls are entirely recovered by chocolate.

Born in Legnano, a small town close to Milan, Daniele studied at the Carlo Porta Culinary Institute and decided to become a pastry chef from a very young age, a path inspired by his mother preparing a traditional apple pie.

After graduating, he joined the staff of Sant Ambroeus, an historical pastry shop in Milan, and joined Four Seasons Hotel Milano in 2001 as a shy commis chef, without imagining that many years later he would have been the head of the department.

His career made him travel through the best restaurants and pastry shops in Europe. Following his experiences in Milan, he joined the team of Harrods in London, and later had the honour to work alongside the Michelin starred chef Heston Blumenthal at his The Fat Duck. Rich of an extended knowledge, he then decided to move back to Italy as pastry chef of Torre del Saracino, a two-Michelin star restaurant in the peaceful Amalfi coast; and right before joining Four Seasons Hotel Milano, he worked in the three-Michelin starred restaurant Da Vittorio.

“What I learned from all these prestigious experiences? Besides competencies, the lesson that I will always carry with me is the importance of teamwork. Nothing can be achieved without a team. You must have an open dialogue with your collaborators, share doubts, discuss decisions, keep everyone involved and improve techniques and results. Of course having fun is part of the process. In my laboratory there is always a moment for chats and laughs, and sometimes for listening to some music while preparing delicious desserts.”

Daniele is always ready to explore new methods, learn new recipes and open to new cultures. For him, the most important ingredient of pastry is chocolate. “I love the fact that there are so many varieties of cocoa growing around the world, all with distinctive properties, flavours and tastes, and countless ways to use them.” His famous Chocolate Room is a tribute to his favourite ingredient, as it features walls entirely covered by chocolate and hand-decorated, a masterpiece requiring about 500 hours of work every year and one of the highlights of the Hotel’s seasonal Sunday Brunch.