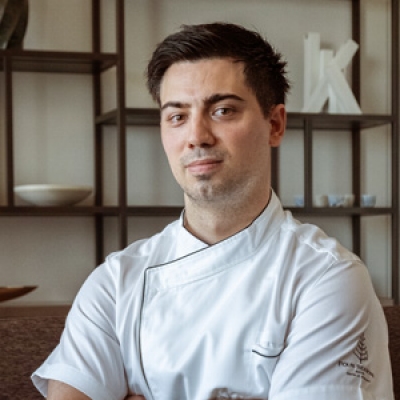 “Pizza is a way of life in Napoli. We’ve perfected the art over centuries – it’s in our blood. If you start making pizza in Napoli, it means you want to be the best.”

Hailing from the Italian city of Naples, Specialty Pizza Chef Alessandro Luca de Leo draws on his legacy to bring the finest traditions of pizza-making to PIGNETO. “Pizza is a way of life in Napoli,” he says, noting that his hometown is the birthplace of pizza. “We’ve perfected the art over centuries – it’s in our blood. If you start making pizza in Napoli, it means you want to be the best.”

Like most Italians, Alessandro sees good food as the centrepiece of spending quality time with loved ones. In the grand tradition of mammas and nonnas through the ages, his mother would make her famous meatballs with tomato sauce for the family every Sunday, “my favourite day”. It is this connection that he now seeks to recreate at Four Seasons, crafting hearty pizzas that bring people together and fill them with joy – a goal that aligns beautifully with Executive Chef Marco Riva’s vision of abbondanza (a life of plenty) at PIGNETO.

So, what is the secret to making the perfect pizza? “The secret is not so secret,” remarks Alessandro, ticking off the essentials: premium ingredients, top-quality tools and a highly accurate method from start to finish. The true artistry, however, lies in kneading the dough – it’s what elevates a pizza chef to greatness. Raw talent is invaluable here, as Alessandro illustrates with the help of his favourite sport: “With the best coach and most expensive gear, anyone can become good at football. But can anyone become Ronaldo or Messi?”

Building on authentic Italian techniques, Alessandro crafts pizzas best described as Neapolitan 2.0. In place of the standard 00 flour, he uses an innovative 0-type flour that is extremely pure and made with 100 percent Italian grains, unlike most brands in Asia which include a mix of foreign grains. This flour became available in Japan only last year, with Alessandro playing an instrumental role in bringing it to the country. Other ingredients also receive careful attention, with some gourmet products sourced locally and the rest imported from Italy. Look out for inspirations from Naples: luscious burrata features in the main menu, while beloved friarielli (broccoli rabe, or nanohana in Japanese) finds its way into daily specials.

Alessandro’s interest in the culinary world was sparked early thanks to his mother and other family members who worked in restaurants. He remembers attending a pizza-making competition as a child, the air thick with excitement. It was this sense of challenge that first drew him to a career in cooking: “when your restaurant is suddenly packed and you’re in trouble, when you need to turn out one perfect pizza after another…I love that feeling.”

In his teens, Alessandro began working nights at a pizzeria, soon discovering that he had the famed Neapolitan knack. After graduating from culinary school in Naples, he honed his skills at a local pizzeria, followed by others in Germany and the UK. “As soon as I stepped out of Italy, I got a pizza culture shock,” he recalls with a smile. “Back home, we always have one whole pizza per person. When I first saw 3-4 people sharing one pizza, I was scandalized.” By now, of course, he takes it in his stride – although he still refuses to share his own pizza with anyone else!

In 2014, Alessandro landed the role of Pizza Chef at VinCantiamo Restaurant in Verona, Italy, followed by a career-defining move to Napoli Pizzeria Yokosuka in Kanagawa, where he taught chefs to create authentic Italian pizza.

As a long-time practitioner of martial arts, Alessandro found an instant connection with Japan. The food was a revelation: “I had never tasted proper Japanese food, so during my first year I experimented with everything. I love sushi, especially maguro, in summer. And in winter, there’s nothing better than a hot bowl of ramen.” His favourite is Yokohama style ramen, a bold broth that blends tonkotsu with shoyu (pork bones with soy sauce). Now in Tokyo with Four Seasons, Alessandro loves to explore the city’s buzzing gastronomic scene.