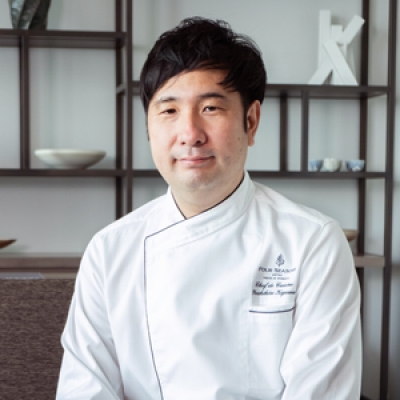 “For me, pure ingredients and thoughtful simplicity are the highest form of sophistication.”

Armed with years of training in Italian kitchens and under Michelin-starred masters, Chef de Cuisine Yoshihiro Kigawa brings a deep knowledge of his craft to PIGNETO. “I visualize our restaurant as a museo di cucina Italiana – a museum of Italian cuisine, where diners can discover traditional dishes in a warm and sociable atmosphere, typically found in the streets and piazzas of Italy,” he says, noting that the team has revived heritage recipes which are tough to track down even in their country of origin. Think Sicilian chocolate prepared according to a 300-year-old method, and fragrant bread baked with almond wood.

Yoshihiro’s culinary sensibility is informed by his early closeness with nature: “for me, pure ingredients and thoughtful simplicity are the highest form of sophistication”. He grew up in Hachioji, a city on the outskirts of Tokyo, surrounded by the serene beauty of mountains, rivers and waterfalls – not to mention a bounty of fresh local produce. Around the time he was graduating high school, a cooking show called “Iron Chef” became very popular in Japan, which first sparked his interest in becoming a chef.

Then, at 19 years old, Yoshihiro went to Italy during summer vacation – and fell in love at first bite. As he recalls, “Even a simple lasagna at a simple restaurant had a gourmet quality.” He was also fascinated by the distinctive variations between regional cuisines. By the end of the trip, he knew he had found his soul food. After earning his Diploma in Western Cuisine from Tokyo Culinary Academy, Yoshihiro began his career in local Italian restaurants, then moved to Sicily in 2005, where he mastered the art of making pasta and antipasto, as well as learning famed confectionary techniques dating back 120 years.

As he became fluent in Italian, Yoshihiro discovered the hidden depths of his chosen cuisine: “In Italy, cooking, culture and history are profoundly connected. They reflect and influence each other deeply.” The next few years took him to Milan, Monza and Firenze, where he learned from luminaries in Michelin-starred kitchens, before returning to Tokyo to join the opening team of a luxury hotel’s Italian restaurant. Most recently, he served as Sous Chef at a fine dining establishment run by an award-winning chef.

In his current role at PIGNETO at Four Seasons, Yoshihiro’s aim is to create an experience that “transports guests to Italy, even while they’re sitting in the heart of Tokyo”. Menus are crafted through a careful process that draws on the landscape of ingredients, the skills of producers and the cultural background of dishes, along with more technical aspects such as nutritional profiles and the concentration of salt and sugar. Yoshihiro also finds creative inspiration in the myriad of shapes and colours around him, from fashion to art and architecture.

On his days off, this creator of Italian cuisine loves to eat out with his wife and fellow chefs, favouring rice dishes and sake – “the fundamentals of Japanese cuisine”. Always in search of off-the-beaten-path gems, he is happy to share clues to one of his favourites: “There is an unnamed soba restaurant in Otsuki-shi, just outside Tokyo, where you can have soba harvested from the buckwheat farm next door. It’s a truly special place.”