A Brief History of the "House with Lions"

Welcome to Hotel Lion Palace St. Petersburg: From the first glimpse of the grand front entrance, guarded by two marble lions, it’s obvious that this is a remarkable building with a rich legacy. Known among city residents as the "House with Lions,” the palace holds a fascinating history.

Here in the centre of royal St. Petersburg, many of the neighbouring monuments are UNESCO World Heritage Sites, exuding the glorious past of this legendary city. Surrounding landmarks include the State Hermitage, Mariinsky Theatre, Kazan Cathedral and Mikhailovsky Castle – all within easy walking distance.

Just to the west of Four Seasons, in St. Isaac’s Square, stands the famous St. Isaac’s Cathedral, the main cathedral of St. Petersburg. For two centuries, the cathedral has been one of the primary symbols of Russia’s northern capital.

Both the square and the cathedral are named in honour of St. Isaac the Dalmatian – patron saint of Peter the Great, the founder of the city. Completed in 1858, the church is a grand-scale masterpiece that can accommodate up to 13,000 people. A spiral staircase with 562 steps allows access to the top of the colonnade, offering breathtaking views across St. Petersburg.

Origins of the Triangular Design

The shape of St. Isaac’s Square was originally an irregular trapezoid, and Montferrand restructured the space to create a more formal rectangle to frame the cathedral. A triangular piece of land was thus cut from the northeast corner of the square – bordered by Admiralteysky Prospekt and Voznesensky Prospekt. This led to the eventual design of a triangular building, which resembles a grand piano in its shape.

Legend suggests the personal involvement of Tsar Alexander I in the building’s destiny. Once, when Alexander I was passing through the city with his aide-de-camp Prince Lobanov-Rostovsky, the Tsar expressed his displeasure with the unsightly state of St. Isaac’s Square. The prince took note but kept his silence, and a few years later showed the Tsar the enormous palace he had built to express his loyalty.

Construction of the Palace

Prince Alexey Lobanov-Rostovsky was a diplomat, writer, art collector, and a noble figure close to Tsar Alexander I.

Historical records show that, in 1817, the lot measuring more than 5,400 square metres (58,125 square feet) was “graciously granted” to his wife, Princess Cleopatra Lobanova-Rostovskaya. Their plan was to erect an elite apartment house. It’s interesting to note that the majority of palaces in the city centre were actually used as apartment buildings.

With the design for the neighbouring St. Isaac’s Cathedral already receiving praise, even before its construction had begun Prince Lobanov-Rostovsky hired the same architect, Auguste de Montferrand, to create a building that would enhance the square.

The Book of Records for Plans and Façades (issue 1816-1821), kept by the Committee for City Buildings, states that the prince “wishes to build a stone house based on attached drawings.” This record was made on April 22, 1818, and included a note stating “the owner commits to finish the indicated house certainly by November of 1819.”

In 1819, as the decorative work was being completed, St. Petersburg newspapers began advertising the leasing of apartments, and the first residents arrived in 1820.

A Success from the Very Beginning

The architecture of the palace is a fine example of High Classicism. At the time, Russians were euphoric about the defeat of Napoleon in the Patriotic War of 1812. The Russian Empire style began with this victory and features a proud, romantic flair. The palace’s design is stately and classical, featuring white columns against Imperial-yellow walls.

The building was not only a business success as an apartment house, but also quickly became one of the capital’s key cultural centres. Events and happenings at the palace were regularly featured in the society columns of popular magazines. The lobby of the building was witness to the many noble visitors who came to visit friends and simply to “see and be seen” at such a fashionable place. Residents would entertain in their lavishly appointed apartments, entertaining guests with private readings, house concerts and dance performances.

The Story of the Lions

The lions on each side of the main entrance have their own story to tell. Throughout history, lions have been associated with protection, strength and nobility. Twin lion sculptures at a mansion’s entrance symbolize power and authority – echoing the tradition of the lions at the 16th-century Villa Medici in Rome.

The lions at the entrance to the Lobanov-Rostovsky mansion have inscriptions on their platforms that indicate they were made by Paolo Triscorni, an Italian sculptor who worked extensively in Russia. As time has passed, the inscriptions have almost disappeared, and today it is possible only to see the first letters of the sculptor’s name: TRI. Most probably, the full inscriptions read: TRISCORNI FECIT CARRARA 1810 – meaning that the sculptures were made in 1810 in his hometown of Carrara, Italy, before being transported to St. Petersburg for installation at the palace.

The lions were immortalized in Alexander Pushkin’s poem The Bronze Horseman, written in 1833. Considered Russia’s greatest poet, Pushkin was renowned for his meticulous attention to detail, and this poem is no exception, including a precise description of the House with Lions. The poem’s main character, young Evgeny, runs for safety from a terrible flood and sits atop a lion while the water flows furiously around.

New-built, high up in Peter’s Square

A corner mansion then ascended;

And where its lofty perron ended

And kept their ward with paw uplifted.

As times changed, the House with Lions continued to play an important part in the history of the city and country. From 1827 to 1917, the palace became a home to the Ministry of War – today, the Ministry of Defense.

During the Soviet era, the building housed a hostel, a school and a state-owned architectural bureau. Over the years, much of the interior was damaged and removed during renovations. At the beginning of the 21st century, the building was passed to the Administration of the President of Russian Federation, and a decision was made to revive this architectural monument as a hotel.

Today, the grand lobby returns guests to the glorious days of Imperial Russia. The ceilings, granite columns and plaster details are the original decorative elements, carefully restored. The magnificent staircase leading to the first floor is one of the jewels of the palace, and the steps of the staircase are the original granite, recalling the footsteps of the original inhabitants.

Guests are invited to share the spirit of Imperial Russia and picture themselves as one of the guests of the palace almost two centuries ago. It’s easy to imagine looking out a window and watching the construction of St. Isaac’s Cathedral, hearing the sound of the horse carriages clacking on the stone pavement, and watching a silent snowfall from the warmth of one's room. 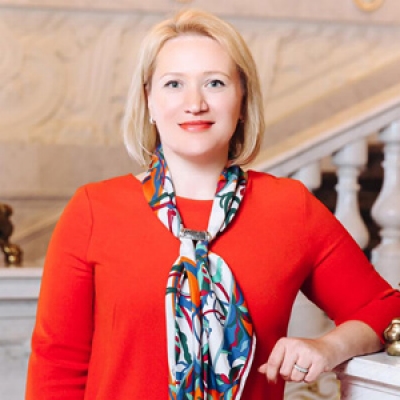